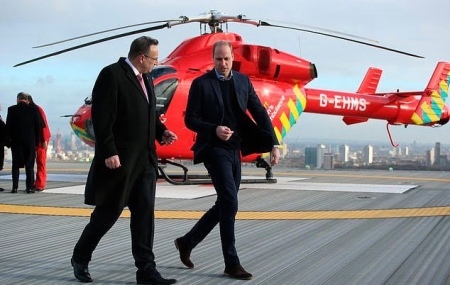 Prince William is set to become the Patron of the London Air Ambulance Charity.

London’s Air Ambulance, established in 1989, is a charity that delivers an advanced trauma team to London’s most seriously injured patients.

The Charity serves 10 million people that live, work and travel within the M25 (London Orbital Motorway), treating an average of five patients every day.

Prince William, 37, witnessed firsthand the critical role such specialty transport services have in emergency medicine. It’s reported that the prince—piloted many life-saving journeys and was proud to serve as a member of such important healthcare teams.

In his new role as patron, Prince William will champion the critical work carried out by the charity—towards its mission.

According to Daily Mail, the charity’s CEO, Jonathan Jenkins, welcomed Prince William by expressing, “we are honoured that the Duke of Cambridge has chosen to become Patron of London’s Air Ambulance charity. We know that with his help as well as the continued support of the public, our crews can reach those who need them most – serving the people of London 24 hours a day, every day of the year.”