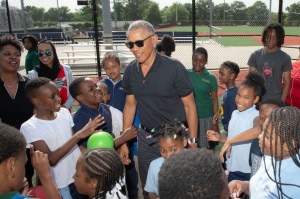 The facility, which is affiliated with the city’s baseball team, provides academic support and baseball and softball for D.C. kids.

Although #44 modestly stated that his game was “raggedy”, he certainly wowed the crowd! A few highlights were during softball, where he hit a double on the first pitch and football, where he threw a touchdown pass.

In addition to sharing passes, he also shared some encouraging words as well. He stated: “If you work hard and listen to your coaches . . . I’m going be on the lookout for you,” Obama said. “You’re going to do something important. You’re going to make a real difference, and we’re going to be proud of you.”

Obama reflected on the experience in an Instagram post on Thursday. “Great to get out there and take a few cuts at the plate yesterday — I had a blast with all these extraordinary young people,” he wrote. “Thanks for letting me drop in and thanks to the Nationals Youth Academy for the outstanding work you do to support youth in DC.”